The Weald & Downland Living Museum is an open-air museum located on a 40-acre landscaped site near Chichester. It houses over 50 historical rural buildings that show how people lived and worked during the past centuries. In recent years, the site has also become home to the BBC's popular TV show “The Repair Shop”.

Amongst the many attractions of the Weald & Downland Living Museum is a working flour mill, operated with the aid of a waterwheel and a large artificial lake. When the Museum decided to build a new visitor centre as part of a programme of enhancements, it was clear that there was an opportunity to refurbish the lake at the same time.

The lake was built as part of the original landscaping when the Museum first opened in 1970. Over time, the challenges of maintenance, natural seeding and plant growth had led to it becoming overgrown. The original lake lining system had also reached the end of its life and was failing, with water from the lake seeping into the ground. These issues not only affected the lake’s appearance and led to onerous maintenance regimes; they also reduced water levels, which affected the operation of the waterwheel. As a result, the Museum was forced to top up the lake levels using water extracted from bore holes, which was not commercially or environmentally viable over the long term.

Specialist contractor Fairwater Ltd was in charge of the lake refurbishment. They began the project by draining the water into a lower natural pond, from which it returned to groundwater. Once the lake was empty, the contractor was able to remodel the existing lake, changing its size, shape and depth. The refurbishment also included the replacement of the existing lining system, using Holcim Building Envelope’ PondGard EPDM lining membrane, along with landscaping designed to encourage wildlife and support natural habitats.

EPDM is a synthetic rubber material that provides excellent resistance to UV exposure, high temperatures, oxidation and frost, making it ideal for use in pond lining materials. It also has excellent puncture resistance and is flexible enough to cope with the natural undulations and normal movement of the substrate, even at temperatures as low as -45 °C.

All in the details

While minimal joints were required to waterproof the main lake area, the more complex space of the mill chase required increased detailing, including building stone walls up the vertical surfaces to completely obscure the liner. There was also a requirement to conceal the liner around the margins of the lake itself to combine the functionality of the new membrane with the natural appearance of a lake and enable reed beds to become established.

For the areas of the lake below the terraces, the pond contractor had to work with the main contractor to enable the metal terrace supports to be anchored to the concrete footings. This involved making precision penetrations in the membrane to allow the supports to be secured in place before resealing the lining using a self-curing rubber strip, designed specifically for use on irregular details, which has been factory-laminated to self-adhesive splice tape. This was adhered around the interface between the horizontal surface of the lake lining and the vertical terrace supports, encapsulating the join with a robust and permanent seal.

MORE INFO ABOUT PONDGARD EPDM
GET EXPERT ADVICE ON YOUR PROJECT 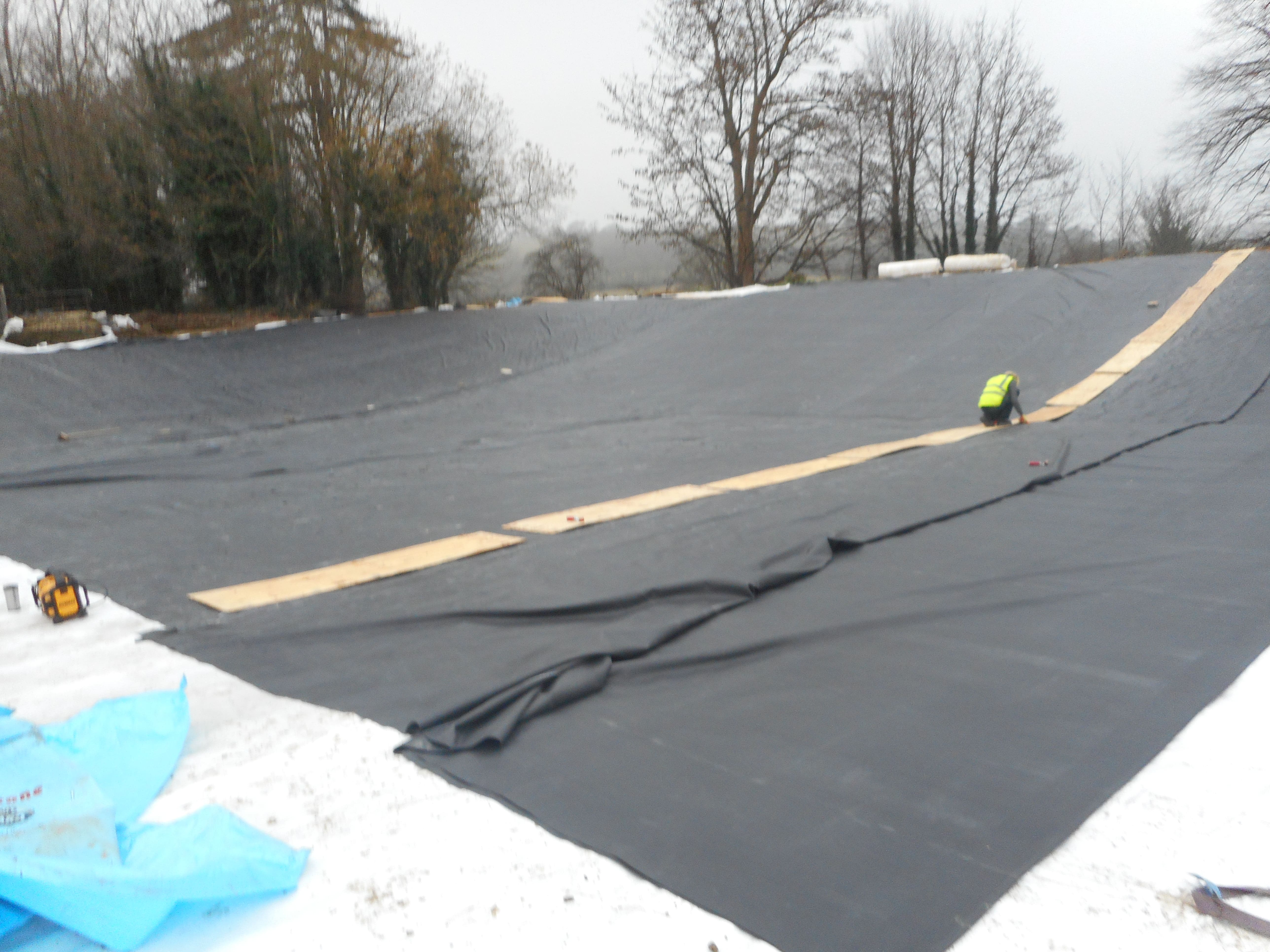 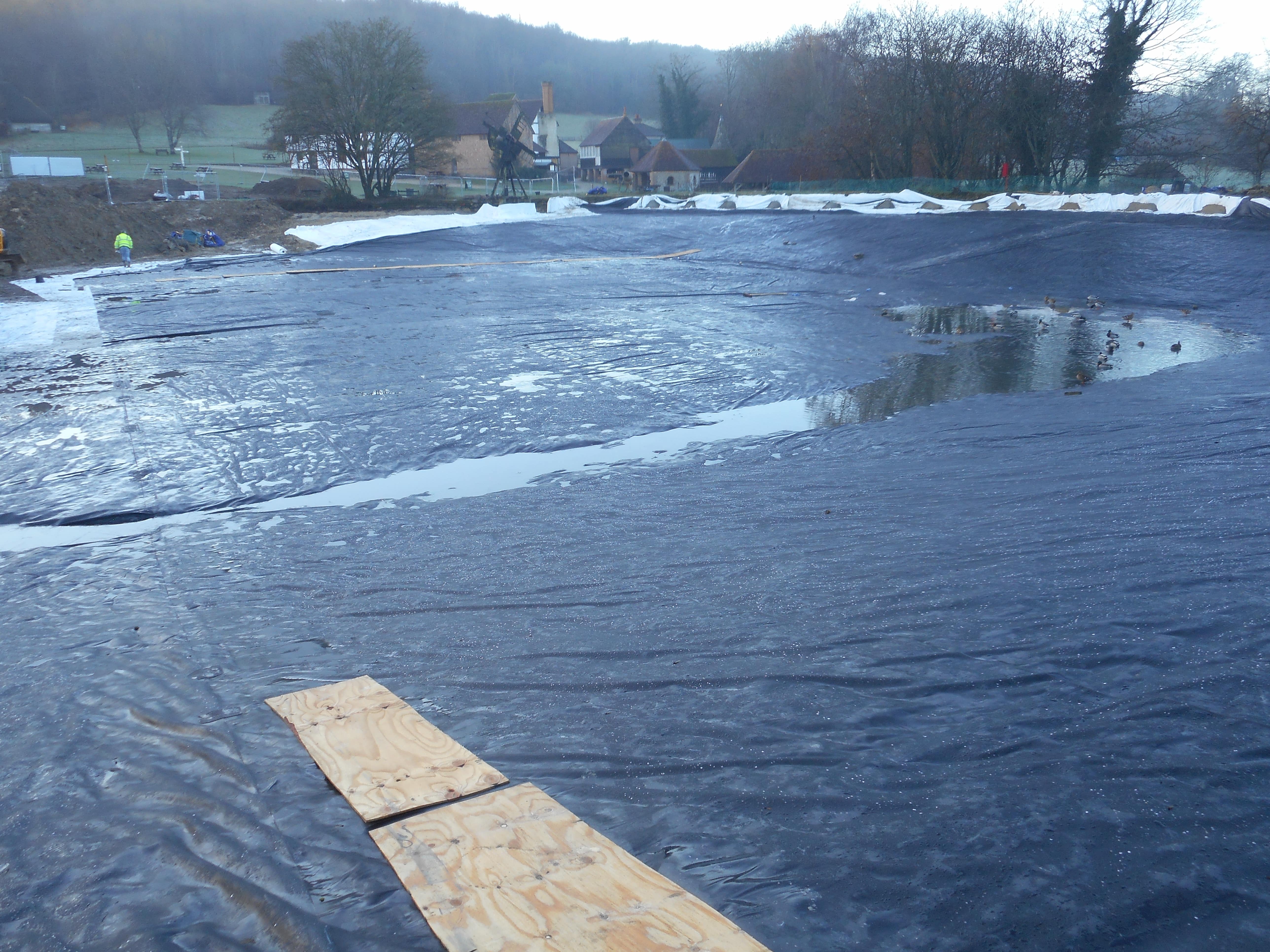 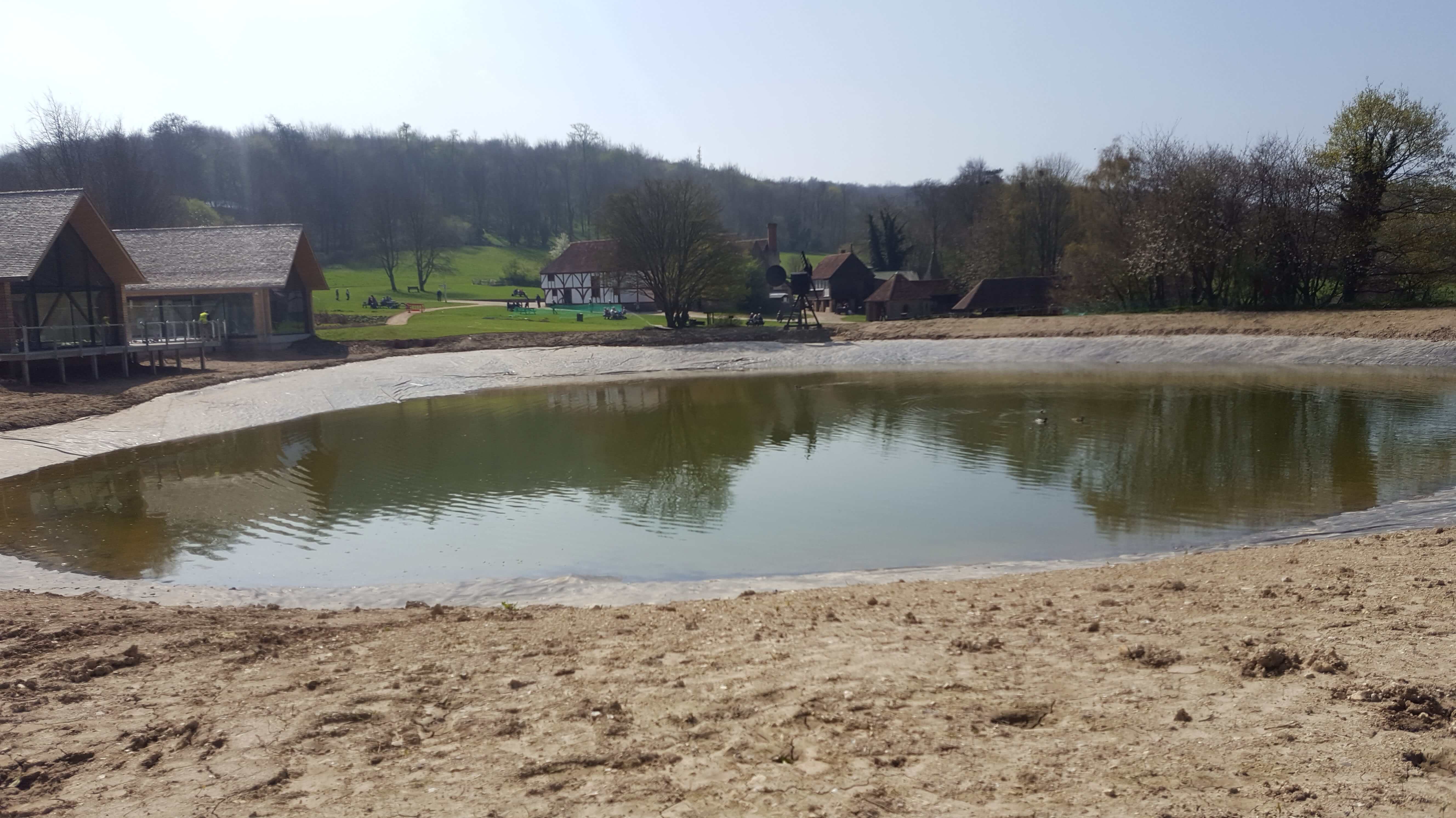 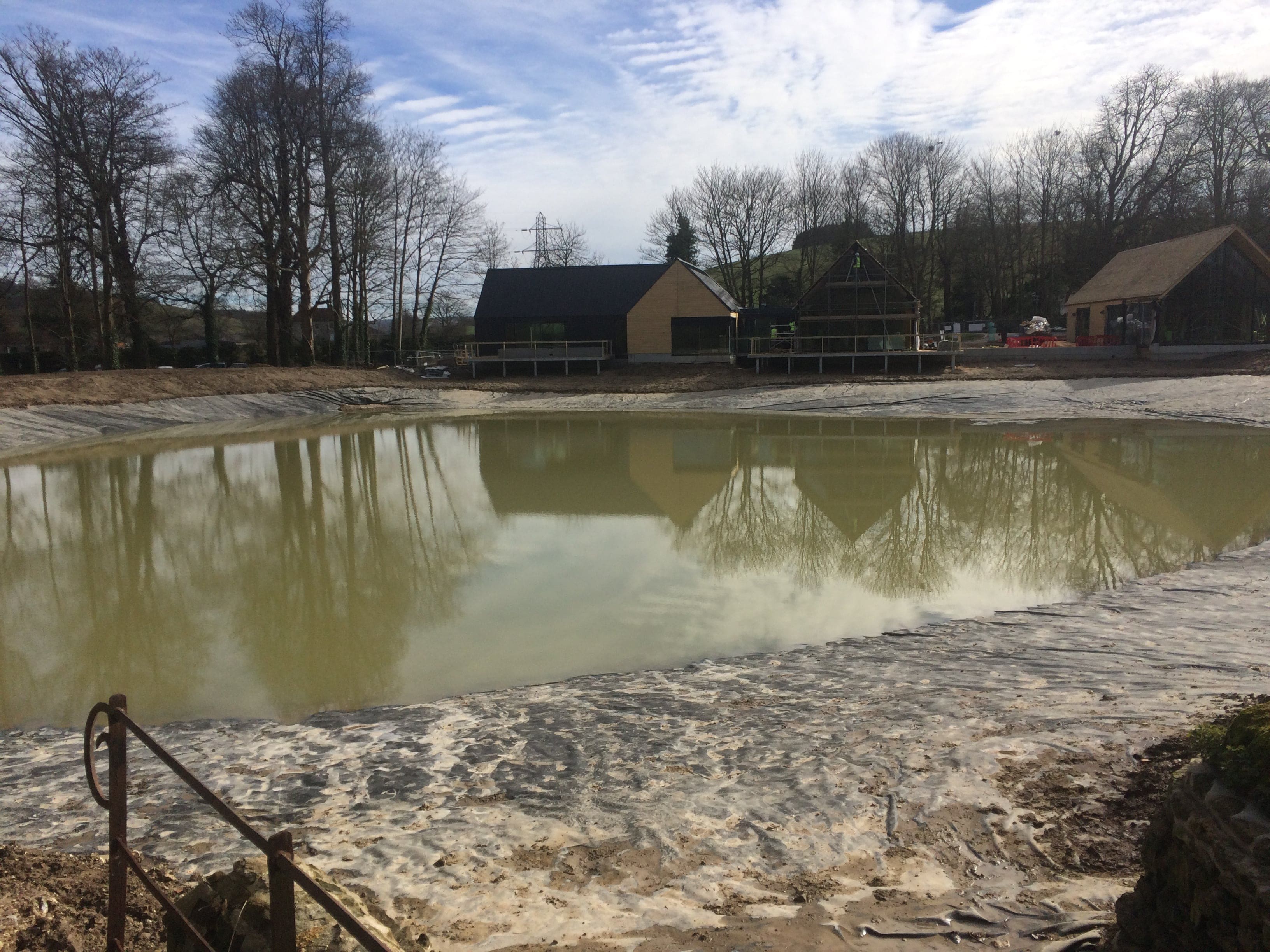 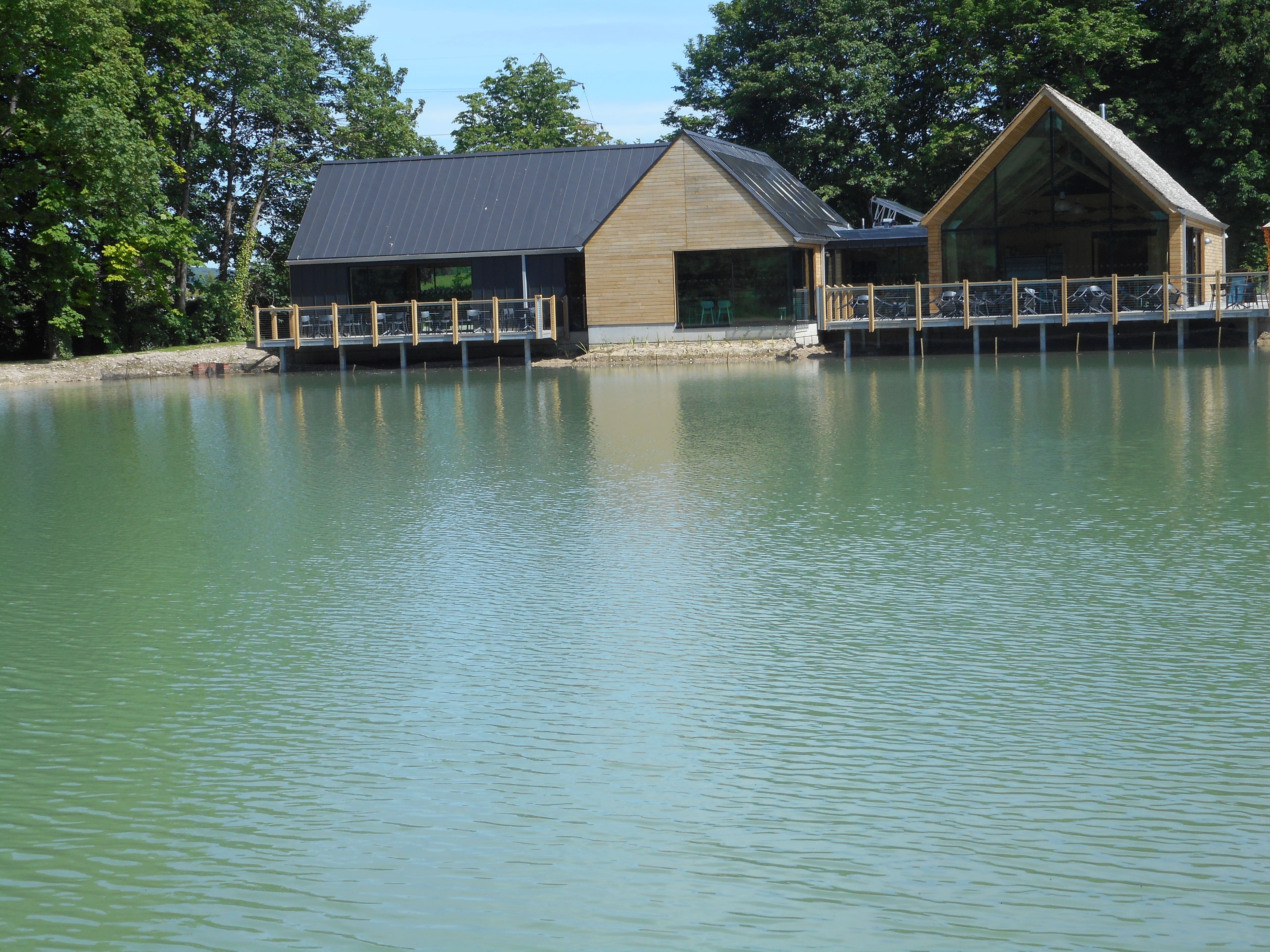